€18.00
5 1
ThingiBOX,
5/ 5
The Arduino Mega 2560 is a development board based on the ATmega2560 microcontroller used in many DIY projects that need a little more power than the Arduino UNO gives us, such as the control of 3D printers.

The Arduino Mega 2560 is a microcontroller board based on the ATmega2560 (datasheet).

It has 54 digital input/output pins (of which 15 can be used as PWM outputs), 16 analog inputs, 4 UARTs (hardware serial ports), a 16 MHz crystal oscillator, a USB connection, a power jack, an ICSP header, and a reset button.

It contains everything needed to support the microcontroller. Simply connect it to a computer with a USB cable to get started. The Mega is compatible with most shields designed for the Arduino Duemilanove or Diecimila too.

The Arduino MEGA is used as controller for most 3D printers derived from the RepRap project. The most used complement for this purpose is the RAMPS shield.

We have two versions of this board. Both versions have the same capabilities but differ on the FTDI chip. The 16U2 version has the ATMEGA16U2 chip as the original version, so we do not need to install any driver on our system, be it Linux, Windows or MacOS X.

The CH340G model mounts the FTDI CH340 chip, which, due to its lower price, has become popular in arduino clones and other boards such as WEMOS and others. To use this version in Linux, you probably wont need to install additional drivers, but you will most likely need them if you use Windows or MacOS X. You can download the drivers from here.

USB cable not included.
1480
5 Items
Comments (0)
No customer reviews for the moment.

Your review appreciation cannot be sent

Are you sure that you want to report this comment?

Your report has been submitted and will be considered by a moderator.

Your report cannot be sent

Your comment has been submitted and will be available once approved by a moderator.

Your review cannot be sent

16 other products in the same category: 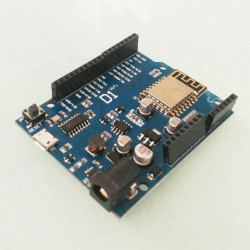